We understand lucky draws really really well. Since we built the first version of our lucky draw system in 2014, we’ve run more than 800 lucky draws at corporate lunch / dinner events and conferences. Not to mention the variations we’ve done for marketing campaigns and activations, both large scale and small. In this post, I’ll take you through how our system evolved over the years and how we integrated new concepts into a typical digital lucky draw.

It all started with a request to build a lucky draw system that could emulate the rolling of a jackpot to pick a lucky draw winner.

It was straightforward – here’s a list, here’s the background image, run an animation, display the winner and their details.

Another feature that was there at the start was the ability to pick multiple winners with a single press of a button – we called that the Mass Draw.

So that’s what we built – the ability to define each contestant’s relation to each prize – they could be participating, could be automatically included, or could be excluded.

The first major change in concept came just a few months after our first iteration – “Can we have the names rolling instead of the numbers rolling?”

So we built that too. Up to this point, it was still pretty standard. But soon after, we met with failures, and ideas were about to emerge.

No evolution is complete without failure, and so we have.

It was 6 years ago, the system was in its infancy stages. It turned ugly fast. We processed the event’s registration as usual. There were 2000 guests in the ballroom. The Mass Draw was completed. All was smooth there.

Then came the time to do the lucky draw on stage. The screen was projected, with 2000 pairs of eyes on it. The VIP was on stage holding the iPad. He triggered the draw to begin. But nothing happened.

We refreshed the system right away and the VIP triggered it again. Nothing happened. The software had failed, and there was nothing we could do. Fortunately our partner at that time organising the event had a backup plan – perforated lucky draw slips were also collected during registration and they resorted to that instead to pick winners.

After the event, we put a few contingencies and processes in place. We started making sure that our standard operating procedures and training materials included critical internal testing. There were tests once right after we’ve set up and at least 10 minutes prior to the live run of the software. A critical internal policy was set in place to not make any further tweaks or customisations to the style or functionality of the software once the last test was completed and verified. We built a fall-back triggering mechanism as an operator so that we could trigger the lucky draws from where we were.

It would be full of hubris on our part to try to stake claim that we will never fail again. There are always risks that blindside us when we least expect it, and being in the events and technology industries, we are possibly Murphy’s Law’s best friend – anything that can go wrong, will go wrong. We don’t guarantee absolutely no hiccups. What we do have is many experiences of failures, and many fail-safes to avoid those pitfalls again. When failure comes, we know what to do so that the show goes on.

Back to happier topics on new lucky draw concepts was a partner from Hong Kong asking us, “Can we pick a lucky table first, then pick a lucky winner from that table?”

During the Chinese New Year one year, our partner at That’s Innovative proposed another interesting idea. There’s a popular national gambling game called Toto, where punters would buy a combination of 6 numbers, each falling between 1 and 49 (both numbers inclusive). Twice weekly, the state-owned lottery organisation would also draw 6 numbers as the winning combination. Their idea: instead of assigning each guest a lucky draw number, they would be assigned 6 double-digit numbers like in a Toto betting slip. Our system would then have to draw an existing winning Toto combination.

This idea came from the creative Benjamin Tan, who has also been the Singapore NDP producer for the last 2 years. In an effort to keep the prize-giving ongoing and as many tables engaged as possible during a large scale event (think more than 4500 pax), he conceptualised the Game Draw.

The idea was simple – the ballroom would be divided into 2 or 3 large groups of tables (e.g. Team Red / Team Green / Team Blue). Each Team would have to send representatives to compete in stage games. The players who won the games would a set of prizes for his entire table. An additional table from the same team would also get to win a set of prizes. So here, we built the ability to filter the eligible participants of a prize. For example – with a press of a button, we could set a certain prize’s eligible participants to all Team Red members only.

Step 1: Pick the tables that would need to send representatives to play the game 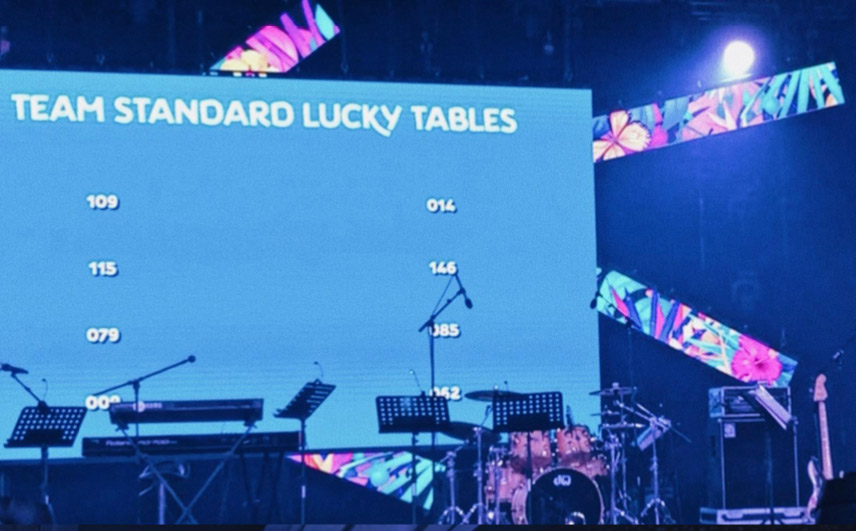 Step 2: When a winner of the game emerges, pick another winning table from the same team that the winner was from

Then came our most terrific brainwave by far. We were exploring turning a digital photo display wall where we could define the positions of each photo into a digital mosaic wall. At that time, the Avengers: End Game trailer had just been released. Looking at a wall of faces on the screen, one of our developers asked, “What if Thanos snapped and half the photos vanished? We could turn it into a lucky draw!”

Check out the video –

Earlier this year, we were asked by BreadTalk Group, “How do we ensure that 400 winners in the Mass Draw get to know that they have won, in under 5 minutes? We can’t possibly display them all on a screen, loop through them in 5 minutes, and expect them to all know.”

So we proposed the ability for all the guests to be able to simply access a checking site, key in their employee ID, and let the system inform them of their winning status.

As we started being engaged more for family days, trade shows and conferences, this was a request that came up more and more. “Could there be an inventory of gifts that were distributed to eligible participants?” 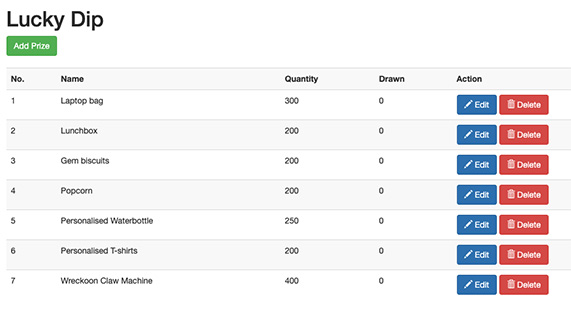 As the range of lucky draws we were engaged for expanded over the years, we also started getting requests for large scale lucky draws, where there were hundreds of thousands of participants, and millions of chances allocated amongst them.

Why is this tough?

Our system is designed in a way that creates a fair chance for each participant for each prize. This means that if a person has 100 chances, there will be 100 virtual entries created for the person. If a participant has just 1 chance, there will only be 1 virtual entry created for them. With a list of participants and the number of chances they are allotted, the first step we have to do is to generate the virtual entries. This can take a considerable amount of time. With any sufficiently-large database, to retrieve a record from it becomes not-so-trivial too.

Apart from this, each virtual entry is given a fair chance at each draw. Compare this with a large box filled with slips of papers, with a hole for a VIP to reach in and grab a slip. There will be no way for the VIP to pick out a slip that is out of his reach. But this is not so for virtual entries through our system, where every entry stands an equal chance. 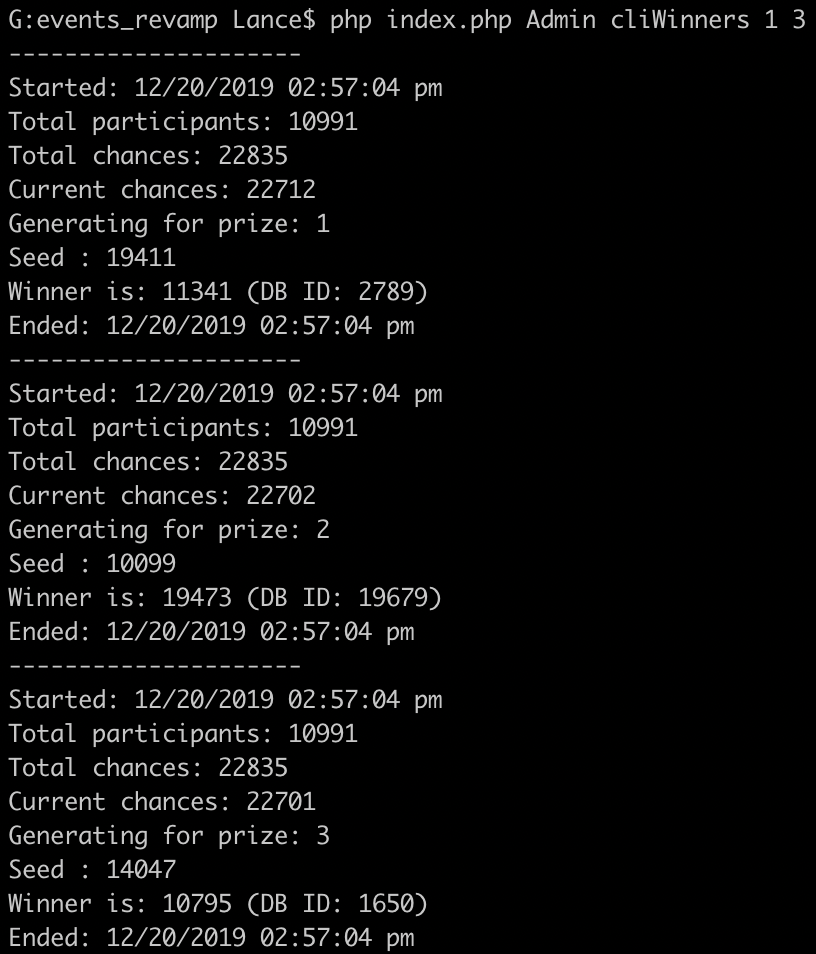 The highlight of our years of R&D in the evolution of our lucky draw system so far is definitely the Thanos Draw. It breaks away from the standard way that lucky draws are conducted, and integrated an element of pop culture into its delivery.

Believe it or not, we still have variations of our lucky draw system that hasn’t been shared here, including usages for offline-to-online-to-offline campaigns, interactive games, and more.

Are there more ideas in the pipeline? For sure. And we’ll see them soon!